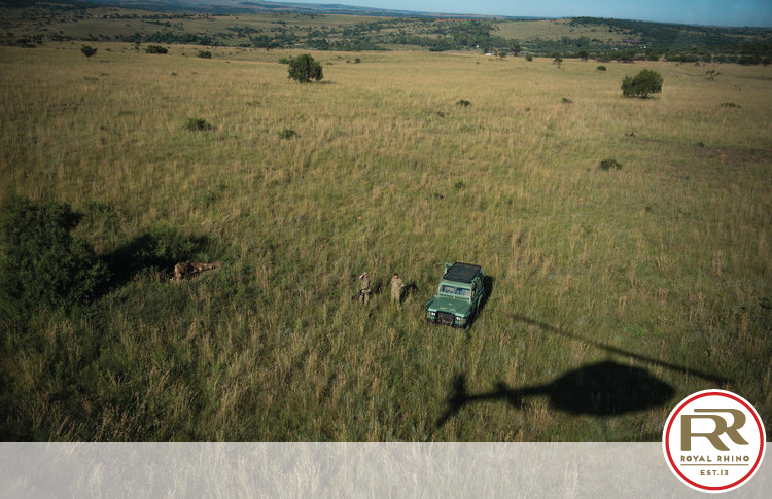 World Rhino Day, celebrated on 22 October, pays tribute to the courageous work of those who are the first line of defense against ruthless poachers. They risk their lives daily, not only by fighting poachers, but also in encounters with dangerous wild animals such as lions, elephants and buffaloes, to ensure future generations will have the privilege of sightings such as the one described above.

The father-and-son combination of Michael and Harrison Cooney set out from the United States earlier this year to honour these heroes, or “The Wildlife Defenders”, as they call them.

Their aim was to highlight the slaughter of rhino in Africa through the creation of photographic images of rangers and other individuals involved in the war against poachers that would tell a story without words. They wanted people to see the photographs and generate curiosity about what it had to do with the rhino war.

According to Michael his entire family has always been committed to wildlife conservation and he and Harrison wanted to focus on the positive work being done. “Harrison wanted to use his photographic talents to recognise the people behind the scenes who are directly involved in protecting rhinos from extinction – the unsung heroes of wildlife protection and conservation.”

Their journey took them to South Africa, Botswana and Zimbabwe and they covered more than 8 000 kilometres by road and air.

EcoTraining, a training school for guides and nature guardians with facilities in South Africa, Zimbabwe, Botswana and Kenia, was the Cooneys’ main partner and hosted them at their Mashatu Camp in Botswana and Makuleke Camp in the northern part of the Kruger Park. According to Michael they were warmly welcomed and offered accommodation by many people during their three week trek.

He enthuses about the “unsung heroes” they met along the way. “Where do I begin? Everyone we met is so committed to saving the rhino and other endangered species. Harrison did not want to post more gruesome images of a rhino with half of its face hacked off. As sad as that is, he wanted to draw people to the issue using other humans who are making a difference.”

The Cooneys have big plans to continue focusing on rhino, and eventually expand their project to other threatened animals such as elephants, pangolins, tigers and orangutangs. “We also want to travel to Asia, where Harrison can create images of the unsung heroes protecting the rhinos and other animals there, and specifically visit China and Vietnam to showcase the people in those countries who are working to curtail consumption of the various animal parts and products.”

–              Read more about the Cooneys’ journey and enjoy Harrison’s images at www.thewildlifedefenders.org