Technology, alliances and focus could turn the tide against rhino poaching in Kruger 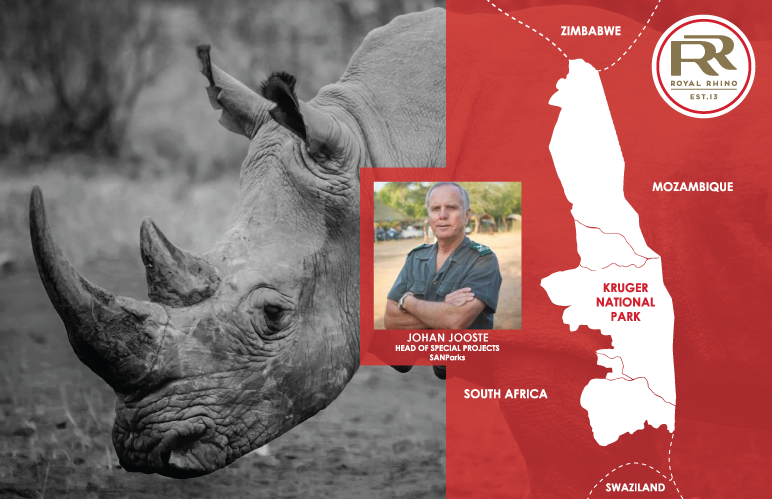 An integrated approach in the fight against rhino poaching, seems to be paying off in the Kruger National Park. This focused strategy includes creating close alliances in Swaziland and Mozambique, involving local communities and employing cutting-edge technology.

Rhino poaching in the Kruger National Park (KNP) has decreased by 23% in 2016 and by a further 34% in the first six months of 2017, as recently announced by Minister of Environmental Affairs Edna Molewa.

Last year, 354 rhino carcasses were found in the park compared to this year’s 243 carcasses in the same period. Although every loss is devastating, the dedicated anti-poaching efforts within the KNP, as well as measures to engage regional, national and international stakeholders, seem to be paying off.

Johan Jooste, a decorated former army major general who heads the KNP’s anti-poaching task team, has emphasised since his appointment in 2013 that only 20% of the answer lies in fighting fire with fire.

Elaborating on his watch as custodian of the KNP’s rhinos, he recalls the three year plan that was implemented from 2013 to 2015, including establishing a well-trained ranger corps, an air-wing and a canine unit.

“In 2015 we phased in sophisticated technology, which included surveillance, early-warning detection and tracking to make detection and intervention possible. These were all force-multipliers to increase the effectiveness of existing measures.

“It took the best of three years to establish a world-class anti-poaching unit, and adding infrastructure and technology. A big part of that was the joint operation centre in Skukuza, which has been in full operation for the past two and a half years.”

Jooste emphasises that although successes have been achieved, it’s still no victory. Tackling the problem at a strategic level with the help of regional, national and international role players, community ownership and consumer management are essential elements in the pursuit of such victory.

“That is why we have established close alliances in Swaziland, Mozambique and with all the communities around us. This has worked very well. Four years ago 75% of the poaching came from Mozambique; now it is only 25%. We work with other governments, who use similar training and equipment. It’s called the Lowveld Lebombo Environmental Protection Alliance.”

As a result of this integrated approach, in the first six months of 2017 more perpetrators were arrested outside than inside the KNP’s borders.

Regarding community ownership, Jooste says although a lot of awareness about poaching is raised, communities must benefit more from conservation by means of rural development. “That is why we need the involvement of more state departments than law enforcement, including social development and the ‘softer departments’. We will have to accelerate this aspect to establish firm and constructive relationships with communities in which they take co-ownership of anti-poaching efforts.

“The other aspect is consumer management – bringing about behavioural change among consumers – which is going to take many years. The two strategic issues in this regard is firstly the collapsing of crime networks, syndicates and smuggling chains. We have to form alliances with other intelligence agencies to improve investigative capacity and intelligence gathering.

“Secondly, we have to keep on working with and exerting pressure on consumer countries like China and Vietnam.”

According to Jooste, the KNP has benefitted from excellent co-operation with, direct involvement in and financial support to the tune of millions of rands from NGOs, other countries, the KNP Honorary Rangers and many others.

“We are thankful that we can show results. We are committed to this marathon we all have to run over the long haul,” says the man under whose watch more than a thousand poachers have thus far been arrested.