The DNA of rhino conservation 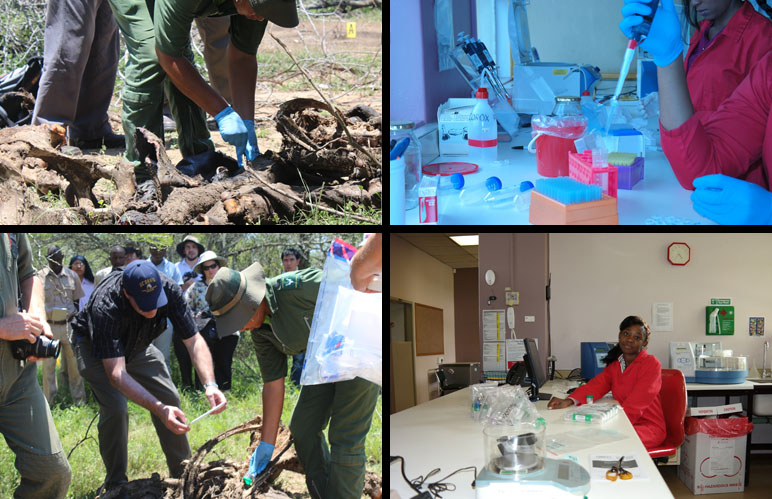 Harper, who heads up the Onderstepoort Veterinary Genetics Laboratory at the University of Pretoria, has been instrumental in doing DNA profiling of rhinos and setting up the so-called RhODIS electronic database system at the university. Read more about it here.

“The DNA does not lie. It provide us with important clues and insights, not only on rhino poaching but also on trade routes,” she says.

RhODIS (or Rhino DNA Index System) has been compared with using CSI-style tactics, fighting wildlife crime with science. It has proven an important forensic tool to help disrupt some major syndicates.

Says Dr Harper, “RhODIS enables law enforcement officers to, for instance, link the DNA of a seized horn with a rhino carcass in a park or reserve. It offers a traceability system of individual rhinos and their horns and ensures a chain of custody for the samples collected.”

RhoDIS has been developed in collaboration with partners, including local law enforcement agencies, SANParks and the World Wildlife Fund.

To date the laboratory has compiled more than 200 forensic reports based on the RhODIS data, and provided the genetic evidence to assist in securing many successful convictions.

Dr Harper, a veterinarian and genetics specialist, believes this kind of genetic profiling offers an important tool in the increasingly global fight for the survival of rhinos. “DNA profiling has become part of the overall investigative process and a tool to assist law enforcement and conservation efforts.”

The database now includes information about the genetic make-up of more than 20 000 rhinos  (including from Kenya, Namibia, Zambia, Botswana, Uganda, Malawi and Zimbabwe). These DNA “fingerprints”, taken from live rhinos, carcasses and stockpiled horns, offers a unique identification of each rhino. It is now also possible to upload information electronically in the field by using an app (called eRhODIS) especially designed for this purpose. The team at the laboratory has also been involved in training people to collect the samples needed.

A commitment was made by the participants to work towards the international standardization and scaling of RhODIS in order to trace rhinoceros products beyond the borders of the range states and into the consumer countries.

“We are in a race against time to help expose and bring the traffickers and syndicates to book,” says Dr Harper. “As scientists we believe our work, if done properly, can help.”

Providing and sharing DNA information might in the end be how the rhino war is won.

Interestingly, the laboratory has also been using the same technology to capture DNA data from lions as well as elephants. These charismatic species are also increasingly in the news as being targeted by poachers.

Isn’t it high time the red tape involved in setting up and maintaining this kind of genetic libraries are removed?