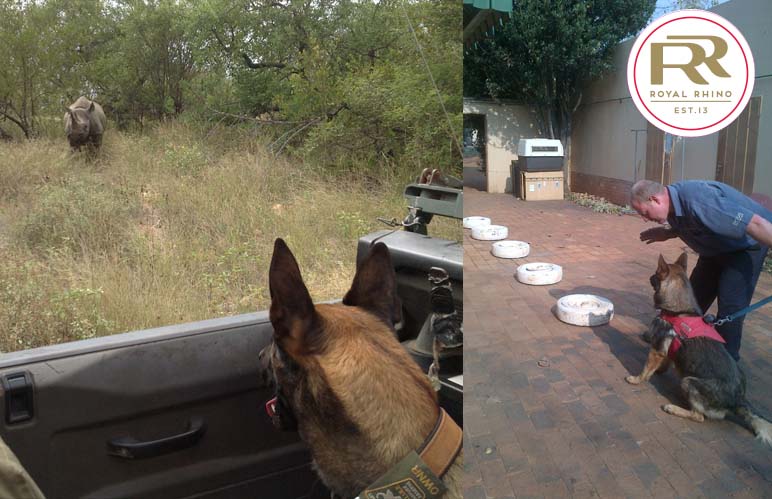 Their skills are second to none,” says Kirsty Brebner, who manages the Endangered Wildlife Trust’s Rhino Project. EWT has been involved in the deployment of anti-poaching tracking dogs in reserves, as well as sniffer dogs at airports and parks over the last few years.

These “rhino” dogs are highly trainable, agile and super efficient, says Brebner. “Their extraordinary sense of smell can be put to great use in conservation.”

Dogs are used worldwide for a variety of conservation projects, including tracking certain species (like whales and tortoises) and to prevent trafficking in wildlife products (like pangolins and bush meat). Now working dogs – mostly Belgian Malinois and German Shepherds – are also making their mark in the ongoing fight against rhino poaching.

EWT “employs” sniffer dogs (to detect wildlife contraband and ammunition) as part of ongoing efforts to support law enforcement agencies to disrupt poaching activities. There are also examples of dogs used to track and apprehend poachers as well as rhino orphan dogs used elsewhere in the country.

EWT is really proud of its canine team deployed at OR Tambo Airport, says Brebner. The team currently has four members – “Rico”, “Condor”, “Renaldo” and “Hitch”. All of them were carefully chosen for their natural working abilities as well as temperament.

It requires hours of training to keep the high-drive dogs fit for purpose (both physically and mentally), she says. This hard work has already paid off. “The airport dogs had success in finding rhino horn and ivory consignments when first deployed in 2012,” says Brebner. “Since then we have had no busts, showing that their presence in the cargo section acts as a huge deterrent to people trafficking in rhino horn and ivory.”

It is not always easy working in noisy warehouses amidst thousands of containers, boxes and smells. The work is intense and the dogs work in short shifts with breaks for resting time in between. “Rhino horn is more difficult to detect than drugs or explosives, especially if it is hidden away in cargo containers. It requires hard work,” says Brebner, “Rhino horn does not have the same volatile organic compounds and strong smell to a dog like narcotics or explosives do. The dogs’ skills needs to be constantly calibrated for the environment in which they work.”

The training programme is therefore grounded in the way that dogs actually “see” the world through smell. (Humans have approximately 6 million scent receptors in their noses; dogs can have upwards of 200 to 300 million enabling them to experience the world visually.)

Currently most of the canine team’s efforts at the airport are focused on high-risk flights, including to the Far East. This region is currently the major market for rhino horn.

In this line of work the relationship between the handler and the dog is extremely important, she says. “They are part of the same team. This is why the handlers also have first option to provide a home in the sun for these dogs once it is time for their retirement.”

EWT hopes to expand this part of its work in future, says Brebner. “We believe our canine team is playing an important part in disrupting rhino trade routes.”

**For more information on EWT’s work with rhino conservation and the “rhino dogs” in particular, visit https://www.ewt.org.za/RHINO/dog.html.